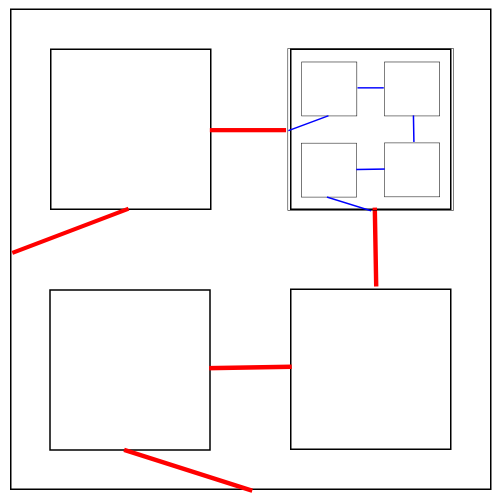 In a first course in differential geometry/topology we are often taught the following version of Sard's theorem:

Over at MathOverflow, Sergei Ivanov has shown that in the case $m = n = 1$, the statement can be modified so that $C^1$ is not necessary.

In this post, we will describe counterexamples in the cases $m > n$ if the condition on $k$ is not satisfied. We will also sketch a natural generalisation of Ivanov's argument for higher dimensions.

The argument given by Ivanov was implicitly contained in Sard's original 1942 paper. It contains the following observation based on Taylor's Theorem:

Ivanov's argument is the special case $m = n = k = 1$. Note that we did not assume that $f$ is $C^k$; we merely assumed $k$ times differentiability (and the vanishing of the top $k$ derivatives at the "critical" points.

The counterexample to Sard's theorem when $k$ is too small was already constructed by Hassler Whitney 7 years prior1. It is an interesting application of the Whitney extension theorem.

Theorem    [Whitney extension]
Let $A \subset \mathbb{R}^m$ be a closed set. Let $f_\alpha:A \to\mathbb{R}$ be a family of functions for every multi-index $|\alpha| \leq k$ for some natural number $k$, such that the $f_\alpha$ are compatible as possible Taylor expansions of some $C^k$ function (see the Wikipedia entry for a more precise formulation), then there exists a function $f:\mathbb{R}^m\to\mathbb{R}$ that is class $C^k$ (and in fact real analytic outside of $A$) such that it and its derivatives up to order $k$ coincide with $f_\alpha$ on the set $A$.

In view of the extension theorem, to construct a counterexample to Sard's theorem in dimensions $m = 2, n = 1, k = 1$ it suffices to construct a closed subset $A$ of $\mathbb{R}^2$ on which $f$ is non-constant but is compatible with having vanishing partial derivatives everywhere. (That this is possible is due to the fact that along non-rectifiable curves, the value of $f$ at two points cannot necessarily be represented by "an integral of the derivative".)

To be more precise, it suffices that we construct a set $A\subset \mathbb{R}^2$ and a function $f:A \to\mathbb{R}$ such that

The third condition ensures that the function $f$ is compatible with having vanishing derivatives everywhere along $A$. Note that the Whitney extension of such a function $f$ would necessarily have the set $S$ containing $f(A)$, which has positive measure.

We start by taking the unit square and removing four smaller squares from it, each of the four squares have side length $\alpha$. On the remaining set we draw line segments connecting the midpoints of the squares as shown in red. This gives our construction at step 1. We iterate now inside each of the small squares by taking a copy of the step 1 construction, scaling it by $\alpha$, and pasting it inside so the path connects. We show the procedure for one of the small squares in blue.

The set $A$ will consist of the closure of the union of the red paths with all of its scaled copies. It is clear that this is a closed, connected set that is topologically identical to the closed unit interval. We explicitly parametrise the set $A$ as follows: divide the unit interval into nine equal portions. The odd numbered portions correspond to the red parts in the image above. The even numbered portions correspond to the portions within the small squares. Each of the even numbered portions we divide into nine parts and repeat. In other words, we use a construction similar to the Cantor staircase. Express the numbers in the interval $[0,1]$ in base 9. Let $p:(0,1)\to \mathbb{N}\cup \infty$ be the function that assigns to a number $s$ the position (after the "decimal" point) in base nine of the first appearance of a even "digit". So $p(0.21345\ldots_9) = 1$, and $p(0.1357802\ldots_9) = 5$. Then we can conclude that $x$ belongs to one of the line segments added at the $p(x)$th step of the construction if $p(x)$ is finite. The points where $p(x)$ are infinite are the limit points added during the closure.

Note that the "path length" of the set $A$ is precisely $r\sum_j (4\alpha)^j$ where $r$ is the total length of the red segments in the image above. We see that when $\alpha < \frac14$ the path length is finite. This means that $A$ represents a rectifiable path and hence we can express $f$ as an integral of its derivatives along $A$, and hence the desired property is not possible. (Or, in other words, we cannot "cancel" the singularity in the Cantor staircase with singularities in the embedding [as there are none].) When $\alpha > \frac14$ we see that "path length" diverges strongly. This non-rectifiability is what allows us to finish this construction.